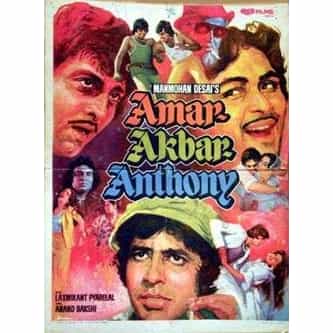 Amar Akbar Anthony is a 1977 Bollywood action comedy film with a lost and found theme, about three brothers separated during their childhood who grew up in three homes, adopting three religions. They meet in their youth to fight a common villain. It was the biggest blockbuster of 1977, and won several awards at 25th Filmfare Awards including Best Actor, Best Music Director and Best Editing. The film was directed by Manmohan Desai and starred three actors: Amitabh Bachchan, Vinod Khanna and ... more on Wikipedia

Ek Rishtaa: The Bond of Love

Amar Akbar Anthony IS LISTED ON