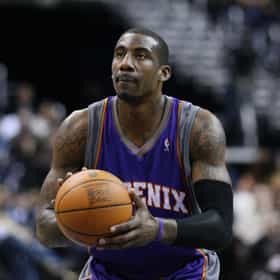 Amar'e Carsares Stoudemire (Hebrew: אמארה סטודמאייר‎; ; born November 16, 1982) is an American-Israeli professional basketball player who last played for Hapoel Jerusalem of the Israeli Premier League and the Basketball Champions League. He won the NBA Rookie of the Year Award in 2003 with the Phoenix Suns, who selected him with the ninth overall pick of the 2002 NBA draft. He made six appearances in the NBA All-Star Game and was named to the All-NBA Team five times, including one first-team selection in 2007. Stoudemire played high school basketball for five different schools, ultimately graduating from Cypress Creek High School in Orlando, Florida, and declaring for the NBA draft as ... more on Wikipedia

Amar'e Stoudemire is ranked on...

Amar'e Stoudemire is also found on...