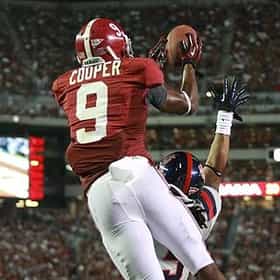 Amari Cooper (born June 17, 1994) is an American football wide receiver for the Dallas Cowboys of the National Football League (NFL). He played college football at the University of Alabama where he was the Biletnikoff Award winner as the nation's top receiver and a unanimous All-American in 2014. Widely considered the top wide receiver prospect of the 2015 NFL Draft, he was selected with the fourth overall pick by the Oakland Raiders. After successful rookie and sophomore seasons that included back-to-back 1,000 yard campaigns and two Pro Bowl appearances, Cooper struggled in his third season with the Raiders, totaling just 680 yards. Mid-way through the 2018 season he was traded to ... more on Wikipedia

Amari Cooper is ranked on...

#300 of 1,556 The Best Football Players Ever 1M VOTES One of the hot topics of debate not only among NFL fans but pundits as well is who is the best football player of all time. ...
#34 of 71 The Best NFL Wide Receivers of the 2010s 6k VOTES Wide receivers have been some of the most dazzling players in all of the NFL. They can very quickly turn the tide of a game....
#33 of 51 The Most Likable Active NFL Players 2.9k VOTES Are you ready for some (very nice) football! Even though football is a gritty game of tough competitors, the sport is filled...
#95 of 249 The Best Wide Receivers of All Time 240.3k VOTES The best wide receivers of all time are a group of elite athletes inclusive of some of the best athletes of all time. The gr...
#6 of 56 The Best College Football Wide Receivers of All Time 7k VOTES American College football, like all football originated as rugby in England and Canada, eventually rugby came stateside, the...
#96 of 202 The All-Around Best Athletes of 2018 32.9k VOTES When it comes to being an all-around best athlete, you're not just talking about the leading scorers of all time, or th...
#28 of 35 NFL Predictions: Things Most Likely To Happen During The 2019 Season 595 VOTES The New England Patriots ground down the Los Angeles Rams in a famously boring Super Bowl in February, and with the new foot...
#15 of 65 The Best College Football Players of 2012 1.7k VOTES The best college football players of 2012 are those talented young men who lead their respective NCAA Football teams to grea...
#21 of 26 NFL Players Most Likely to Be the 2016-17 MVP 33.5k VOTES Every year, the NFL names one player as the league's MVP. It's one of the highest honors in sports, given to the best p...
#43 of 108 The Coolest Players in the NFL Right Now, Ranked 4.4k VOTES The coolest players in the NFL currently are not necessarily the biggest stars. Many of these players could be considered am...
#7 of 53 The Best NFL Players From Florida 1k VOTES Here are the best NFL players from Florida! The list features all-time record holders, Hall of Famers, All-Pros, and elite t...
Famous People Whose Last Name Is Cooper 22k VIEWS Being a fairly common name, it's no surprise there are a lot of famous people with the last name Cooper. Do you recognize al...
#44 of 50 The Best Oakland Raiders First-Round Picks In The NFL Draft 679 VOTES The Oakland Raiders' best first-round NFL draft picks have gone on to the Hall of Fame. Players like Tim Brown, Marcus Allen...

Amari Cooper is also found on...