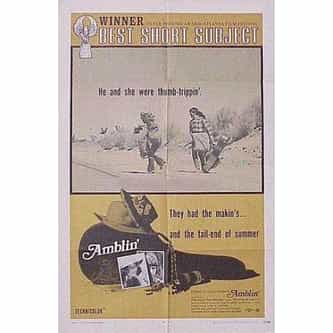 Amblin' is a short film released in 1968. It is the first completed film shot by Steven Spielberg on 35mm. The film is a short love story set during the hippie era of the late 1960s about a young couple making their way through the desert to a paradisaical beach. The film is silent except for an acoustic guitar-led soundtrack. In later years Spielberg named his successful company after his first movie — Amblin Entertainment. ... more on Wikipedia