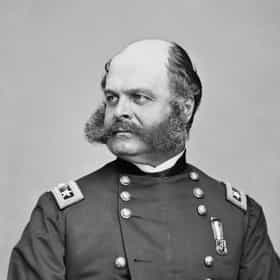 Ambrose Everett Burnside (May 23, 1824 – September 13, 1881) was an American soldier, railroad executive, inventor, industrialist, and politician from Rhode Island. He served as governor and as a United States Senator. As a Union Army general in the American Civil War, he conducted successful campaigns in North Carolina and East Tennessee, as well as countering the raids of Confederate General John Hunt Morgan, but suffered disastrous defeats at the Battle of Fredericksburg and the Battle of the Crater. His distinctive style of facial hair became known as sideburns, derived from his last name. He was also the first president of the National Rifle Association. ... more on Wikipedia

Ambrose Burnside is also found on...