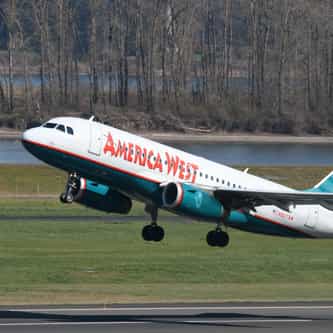 America West Airlines was a U.S. airline headquartered in Tempe, Arizona. Their main hub was at Sky Harbor Airport in Phoenix, Arizona, with a secondary hub at Las Vegas McCarran International Airport in Las Vegas, Nevada. The airline became part of the US Airways Group after a merger in 2005. America West was the second largest low-cost carrier in the US after Southwest Airlines and served approximately 100 destinations in the US, Canada, and Mexico. Service to Europe was provided through ... more on Wikipedia

America West Airlines IS LISTED ON

#8 of 8
757 VOTES Low Cost Airlines in the USA
23.4k VIEWS All Australian Airlines
List of Companies That Hire Felons Companies Headquartered in Arizona