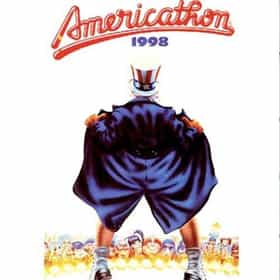 Americathon is a 1979 American comedy film starring John Ritter, Fred Willard, Peter Riegert, Harvey Korman, and Nancy Morgan, with narration by George Carlin, based on a play by Firesign Theatre alumni Phil Proctor and Peter Bergman. The film also includes appearances by Jay Leno, Meat Loaf, Tommy Lasorda, and Chief Dan George, with a musical performance by Elvis Costello. Being cast 20 years into the future, the film contains many prophetic elements, such as: predicting the demise of the Soviet Union, the prevalence of reality television, and the sale of public assets to the private sector Also, The Beach Boys are shown still together and recording in 1998. ... more on Wikipedia

Americathon is also found on...