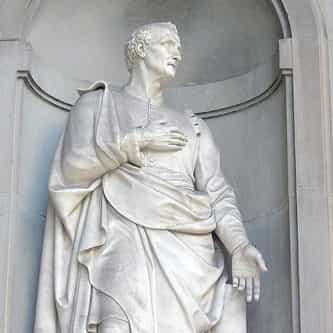 Amerigo Vespucci (; Italian: [ameˈriːɡo veˈsputtʃi]; March 9, 1454 – February 22, 1512) was an Italian explorer, financier, navigator, and cartographer who was born in the Republic of Florence. Sailing for Portugal around 1501–1502, Vespucci demonstrated that Brazil and the West Indies were not Asia's eastern outskirts (as initially conjectured from Columbus' voyages) but a separate, unexplored land mass colloquially known as the New World. In 1507, the new continent was named America ... more on Wikipedia

Amerigo Vespucci IS LISTED ON