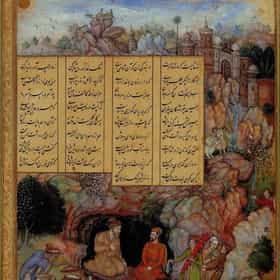 Ab'ul Hasan Yamīn ud-Dīn Khusrau (1253 – 1325) (Persian: ابوالحسن یمین الدین خسرو‎, Urdu: ابوالحسن یمین‌الدین خسرو‎), better known as Amīr Khusrow Dehlavī, was a Sufi musician, poet and scholar from India. He was an iconic figure in the cultural history of South Asia. He was a mystic and a spiritual disciple of Nizamuddin Auliya of Delhi, India. He wrote poetry primarily in Persian, but also in Hindavi. A vocabulary in verse, the Ḳhāliq Bārī, containing Arabic, Persian, and Hindavi terms is often attributed to him. Khusrow is sometimes referred to as the "voice of India" or "Parrot of India" (Tuti-e-Hind), and has been called the "father of Urdu ... more on Wikipedia

Amir Khusrow is ranked on...

#9 of 37 The Best Qawwali Singers 14.6k VOTES The story of Qawwali music starts over 700 years ago in late 13th century India. Like many great genres of music, Qawwali ha...
Famous People Named Amir 1.5k VIEWS Who knew there were so many famous people named Amir in the world? Our list of celebrities named Amir includes pictures an...

Amir Khusrow is also found on...