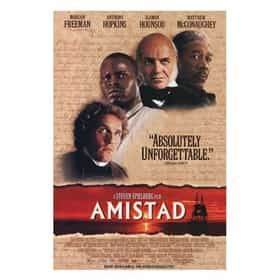 Amistad is a 1997 historical drama film directed by Steven Spielberg, based on the true story of the 1839 mutiny aboard the slave ship La Amistad, during which Mende tribesmen taken and managed to gain control of their captors' ship off the coast of Cuba, and the international legal battle that followed their capture by a U.S. revenue cutter. The case was ultimately resolved by the United States Supreme Court in 1841. Morgan Freeman, Nigel Hawthorne, Anthony Hopkins, Djimon Hounsou, and Matthew McConaughey had starring roles. ... more on Wikipedia

Amistad is ranked on...

Amistad is also found on...