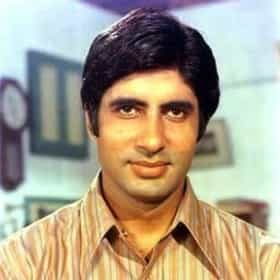 Amitabh Bachchan (pronounced [əmɪˈtaːbʱ ˈbətʃːən]; born Inquilaab Srivastava; 11 October 1942) is an Indian film actor, film producer, television host, occasional playback singer and former politician. He first gained popularity in the early 1970s for films such as Zanjeer, Deewaar and Sholay, and was dubbed India's "angry young man" for his on-screen roles in Bollywood. Referred to as the Shahenshah of Bollywood, Sadi ka Mahanayak (Hindi for, "Greatest actor of the century"), Star of the Millennium, or Big B, he has since appeared in over 190 Indian films in a career spanning almost five decades. Bachchan is widely regarded as one of the greatest and most ... more on Wikipedia

Amitabh Bachchan is ranked on...

Unicef Goodwill Ambassadors 31.6k VIEWS Unicef Goodwill Ambassadors are often celebrities who travel the world using their fame to promote Unicef in their home coun...
The Top 50 People with the Most Twitter Followers 26.4k VIEWS List of the top 50 celebrities with the most Twitter followers, in order. Since the advent of the microblogging social netwo...
Celebrities You Didn't Know Have Vitiligo 490.5k VIEWS List of Celebrities with Vitiligo, loosely ranked by fame and popularity. Vitiligo is a condition that effects the pigments ...

Amitabh Bachchan is also found on...