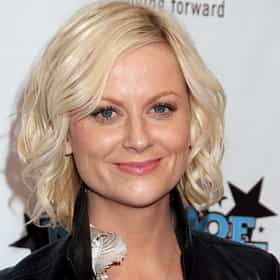 Amy Meredith Poehler (; born September 16, 1971) is an American actress, comedian, director, producer, and writer. After studying improv at Chicago's Second City and ImprovOlympic in the early 1990s, she Co-founded the Chicago-based improvisational-comedy troupe Upright Citizens Brigade. The group moved to New York City in 1996 where their act became a half-hour sketch comedy series on Comedy Central in 1998. Along with other members of the comedy group, Poehler is a founder of the Upright Citizens Brigade Theatre. She is best known for starring as Leslie Knope in the NBC sitcom Parks and Recreation, for which she won a Golden Globe Award for Best Actress in a Television Musical or ... more on Wikipedia

Maya Rudolph
The Best Parks And Recreation Episodes 4.1k votes List of the best Parks and Recreation episodes, as determined by voters like you. Leslie Knope and her undying love of the C...
Which Amy Poehler Character Are You, According To Your Zodiac Sign? 500 views Amy Poehler is an actor, writer, producer, best-selling author, mother, business owner, and comedic powerhouse. She's create...
Amy Poehler Loves And Hookups 26.6k views Who is Amy Poehler dating? Many famous men have dated Amy Poehler, and this list will give you more details about these luck...
The Best Amy Poehler Movies 613 votes List of the best Amy Poehler movies, ranked best to worst with movie trailers when available. Amy Poehler's highest grossing...
11 Pictures of Young Amy Poehler 28.6k views This slideshow features photos of a young Amy Poehler, the famous comedian, actress, producer and director who first made wa...

Amy Poehler is ranked on...

Amy Poehler is also found on...