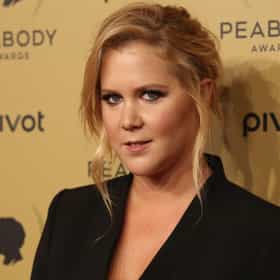 Amy Beth Schumer (born June 1, 1981) is an American stand-up comedian and actress. She ventured into comedy in the early 2000s before appearing as a contestant on the fifth season of the NBC reality competition series Last Comic Standing in 2007. Since 2013, she has been the creator, co-producer, co-writer, and star of the Comedy Central sketch comedy series Inside Amy Schumer, for which she received a Peabody Award and for which Schumer has been nominated for five Primetime Emmy Awards, winning Outstanding Variety Sketch Series in 2015. Schumer wrote and made her film debut in a starring role in Trainwreck (2015), for which she received nominations for the Writers Guild of America ... more on Wikipedia

Amy Schumer is ranked on...

Amy Schumer is also found on...