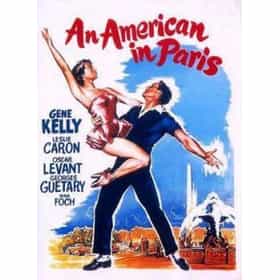 An American in Paris is a 1951 American musical film inspired by the 1928 orchestral composition by George Gershwin. Starring Gene Kelly, Leslie Caron, Oscar Levant, Georges Guétary, and Nina Foch, the film is set in Paris, and was directed by Vincente Minnelli from a script by Alan Jay Lerner. The music is by George Gershwin, with lyrics by his brother Ira, with additional music by Saul Chaplin, the music director. The story of the film is interspersed with dance numbers choreographed by Gene Kelly and set to Gershwin's music. Songs and music include "I Got Rhythm", "I'll Build A Stairway to Paradise", " 'S Wonderful", and "Our Love is Here to ... more on Wikipedia

An American in Paris is ranked on...

#31 of 373 The Best Musical Movies of All Time 169.8k VOTES The best musical movies of all time, ranked by fans and critics. This list include both the best original musical movies and...
#70 of 212 Musical Movies With the Best Songs 104.2k VOTES What are the greatest musical movies with the best songs? This list includes many of the greatest movies ever made, in large...
#34 of 245 Critically Acclaimed Movies That Kinda Suck 109.9k VOTES List of supposedly great films that actually kind of suck. This list includes films that have won or been nominated for Osca...
#52 of 127 The Best Oscar-Winning Scores 9.9k VOTES What is best Oscar-winning musical film score? This list includes every film score that has won an Academy Award. Oscar-winn...
#25 of 50 The Best Oscar-Nominated Movies of the 1950s 4.9k VOTES The 1950s: in America, the decade is synonymous with rock 'n' roll, bobby socks, and the movies. If that last one didn't com...
#45 of 76 The Best Oscar-Winning Screenplays 5.6k VOTES What is best Oscar-winning screenplay? This list includes every film that has won an Oscar for Best Original Screenplay...
#14 of 23 The Best Musical Movies Nominated for Best Picture 1.3k VOTES Sometimes, movies can inspire you to break out into song. No wonder so many movie musicals have been nominated for the Aca...
#15 of 50 The Worst Best Picture-Winning Films 35.8k VOTES These are the absolute worst Best Picture movies ever made, ranked by the Ranker community. This list is made up of best pic...
#20 of 199 The Best Metro-Goldwyn-Mayer Movies List 4.4k VOTES List of Metro-Goldwyn-Mayer movies, ranked best to worst, including trailers, genres, and release dates. Metro-Goldwyn-Mayer...
#1 of 100 The Best Movies of 1951 3.5k VOTES List of the best movies of 1951, with movie trailers when available. Famous actors and actresses like Jeff Bridges, William ...
AFI's Top 100 Love Story Movies 18.8k VIEWS AFI's list of the best love story films of all-time. This romance movies list is sure to sweep you off your feet.
#2 of 39 The Best Leslie Caron Movies 569 VOTES List of the best Leslie Caron movies, ranked best to worst with movie trailers when available. Leslie Caron's highest grossi...

An American in Paris is also found on...