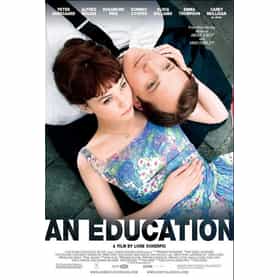 An Education is a 2009 coming-of-age drama film, based on a memoir of the same name by British journalist Lynn Barber. The film was directed by Lone Scherfig from a screenplay by Nick Hornby, and stars Carey Mulligan as Jenny, a bright schoolgirl, and Peter Sarsgaard as David, the charming con man who seduces her. The film was nominated for three Academy Awards in 2010: Best Picture and Writing for Nick Hornby, and Best Actress for Carey Mulligan. An Education premiered at the 2009 Sundance Film Festival to critical acclaim. It screened on 10 September 2009 at the Toronto International Film Festival and was featured at the Telluride by the Sea Film Festival in Portsmouth, New ... more on Wikipedia

An Education is ranked on...

An Education is also found on...