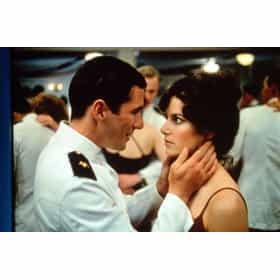 An Officer and a Gentleman is a 1982 American drama film that tells the story of a U.S. Navy aviation officer candidate who comes into conflict with the Marine Corps Gunnery Sergeant who is the drill instructor training him and his class at Aviation Officer Candidate School. It was written by Douglas Day Stewart and directed by Taylor Hackford. It starred Richard Gere, Debra Winger and Louis Gossett, Jr., who won the Academy Award for Best Supporting Actor for the film, and was produced by Lorimar Productions for Paramount Pictures. The film's title uses an old expression from the British Royal Navy and subsequently from the U.S. Uniform Code of Military Justice, as being charged with ... more on Wikipedia

An Officer and a Gentleman is ranked on...

An Officer and a Gentleman is also found on...

Every Oscar Winning Film Ever Romance Movies and Films List of Films Scored By Jack Nitzsche List of All Movies Released in 1982 Movies with Cinematography by Donald E. Thorin