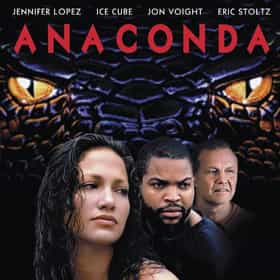 Anaconda is a 1997 adventure-horror film, directed by Luis Llosa, starring Jennifer Lopez, Ice Cube, Jon Voight, Eric Stoltz, Owen Wilson, Kari Wuhrer and Jonathan Hyde. It centers on a film crew for National Geographic who have been taken hostage by a snake hunter who is going after the world's largest giant anaconda, which is discovered in the Amazon Rainforest. Despite receiving mostly negative reviews from critics, the film was a box office hit and was followed by one theatrical sequel, Anacondas: The Hunt for the Blood Orchid, and two made-for-television sequels, Anaconda 3: Offspring and Anacondas: Trail of Blood. On November 4, 2013, ShockTillYouDrop announced that a ... more on Wikipedia

Over 20 Years Later, 'Anaconda' Is Still A Delightfully Dumb Cinematic Experience 3.1k views Anaconda, the gloriously over-the-top giant snake movie from 1997, is the Showgirls of snake movies. Though popular upon its...

Anaconda is ranked on...

Anaconda is also found on...