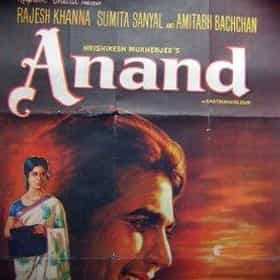 Anand is a 1971 Indian drama film written and directed by Hrishikesh Mukherjee. It stars Rajesh Khanna and Amitabh Bachchan in lead roles, with Khanna playing the title role. The dialogues were written by Gulzar. It is widely considered as one of the best films of Hindi film industry and the role of Anand is regarded as one of Rajesh Khanna's best roles. Upon its release, the film was a major hit. It won numerous awards and enjoys a cult status. ... more on Wikipedia

Anand is ranked on...

Anand is also found on...