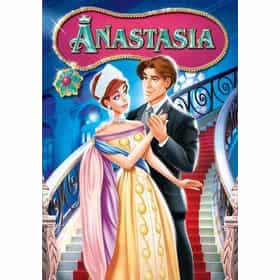 Anastasia is a 1997 American animated musical fantasy drama film produced by Fox Animation Studios and distributed by 20th Century Fox. Directed by former Disney animation directors Don Bluth and Gary Goldman, the film is an adaptation of the legend of Grand Duchess Anastasia Nikolaevna of Russia, which claims that she in fact escaped the execution of her family. It tells the story of an eighteen-year-old orphan named Anya who, in hopes of finding some trace of her family, sides with a pair of con men who wish to take advantage of her likeness to the Grand Duchess. The film features the voices of Meg Ryan, John Cusack, Kelsey Grammer, Christopher Lloyd, Hank Azaria, Bernadette Peters, ... more on Wikipedia

It's Time To Admit The Cartoon 'Anastasia' Was Unspeakably Weird 78.3k views While widely considered a classic children’s film, 1997's Anastasia was super dark. Of course, it's not the only grim kids' ...
Every Song in Anastasia, Ranked by Singability 696 votes The 1997 film was a favorite non-Disney princess movie for many, so fans were thrilled when Anastasia made its Broadway debu...

Anastasia is ranked on...

Anastasia is also found on...