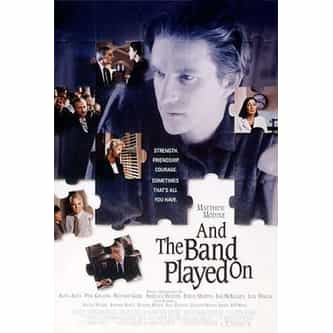 And the Band Played On is a 1993 American television film docudrama directed by Roger Spottiswoode. The teleplay by Arnold Schulman is based on the best-selling 1987 non-fiction book And the Band Played On: Politics, People, and the AIDS Epidemic by Randy Shilts. The film premiered at the Montreal Film Festival before being broadcast by HBO on September 11, 1993. It later was released in the United Kingdom, Canada, Spain, Germany, Argentina, Austria, Italy, Sweden, the Netherlands, France, ... more on Wikipedia

FANS OF And the Band Played On ALSO LIKE

And the Band Played On IS LISTED ON

good documentaries to watch high, superman heroes and villains, greatest cartoons of all time, edwin valero boxrec, high movies on netflix, body switching movies, movies like teeth, what would i look like as a jedi, old movie film, cartoons of the 70s and 80s list