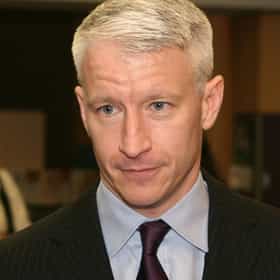 Anderson Hays Cooper (born June 3, 1967) is an American journalist, television personality, and author. He is the primary anchor of the CNN news show Anderson Cooper 360°. The program is usually broadcast live from a New York City studio; however, Cooper often broadcasts live from CNN's studios in Washington, D.C., or on location for breaking news stories. In addition, he is a correspondent for 60 Minutes. From September 2011 to May 2013, he also served as host of his own eponymous syndicated daytime talk show, Anderson Live. ... more on Wikipedia

Anderson Cooper is ranked on...

#145 of 194 The Hottest Men Over 40 1.1M VOTES The hottest men in Hollywood? Turns out, the older they get, the more we like them! Like fine wines, tweens, and your favori...
#14 of 91 The Hottest Silver Foxes 71.6k VOTES Silver foxes are among the sexiest older men on the planet. A bit of gray streaked into a full head of hair on a man with we...
#41 of 166 The Most Ridiculous Political Pundits 162.6k VOTES This is a bipartisan list of the most over-the-top, spittle-stained, fist-thumping, hyperbolic political pundits of all ti...
#25 of 54 The Most Influential News Anchors of All Time 14.2k VOTES TV news anchors have a long history of being trusted sources for world news and events. The best news anchors don't just rep...
#14 of 14 Times Real Famous People Had A Significant Role In Comics 256 VOTES With Robert Downey Jr. portraying Iron Man, Scarlett Johansson as Black Widow, and Jason Momoa as Aquaman, the notion o...
#27 of 45 The Most Trustworthy Newscasters on TV Today 44.5k VOTES Who are the most trustworthy anchors and news personalities today? We all know the names Walter Cronkite, Edward R. Murrow, ...
#23 of 25 The Most Eligible Bachelors of 2019 34k VOTES UPDATED: Check out the most eligible bachelors of 2020! Let's face it, these days it's hard to find high-quality eligible ...
#12 of 29 29 Celebrities Who Have Shown Up In Comic Books 2.8k VOTES Famous people have made comic book cameos almost as long as comics have been on sale. Comics are a fantastic medium for a ...
#3 of 7 All of Madonna's Onstage Kisses, Ranked 1.3k VOTES In a genuine freak out that’s usually reserved for dresses that change color, members of One Direction, and celebrity phone ...
#10 of 25 People who voted for Anderson Cooper... are 12x more likely to vote for Neil deGrasse Tyson on this list The Greatest Internet Heroes of 2012 1.8k VOTES Internet heroes are those people who inspire the masses, who use the Internet to do amazing or enlightening things and who m...
#29 of 30 People who voted for Anderson Cooper... are 3x more likely to vote for Brad Pitt on this list are 4x more likely to vote for Woody Harrelson on this list 30 Amazing Actors Who Could Play Cable 56.3k VOTES Cable is the son of Cyclops and Jean Grey (well... Jean Grey's clone, but we won't get into that) and is of the X-Men who ...
#8 of 12 TV Personalities You'd Want to Play Drinking Games With 2.1k VOTES We've all been there. A high school friend's basement while their parents are away. A college buddy's back porch on a lazy S...
Celebrities Who Were Rich Before They Were Famous 3.1M VIEWS This list of celebrities born into wealthy families, is loosely ranked by fame and popularity. Most actors struggle to pay...
Famous People Whose Last Name Is Cooper 21.3k VIEWS Being a fairly common name, it's no surprise there are a lot of famous people with the last name Cooper. Do you recognize al...
14 Celebrities Who Are Heirs 1.3M VIEWS List of celebrities who are heirs, loosely ranked by fame and popularity. Being an heir to a gigantic fortune can give a cel...
Famous Children Who Have Made Their Own Names in Different Industries 217.8k VIEWS Usually in famous Hollywood families, the apple doesn't fall too far from the tree. All you have to do is look at the Smith ...
50+ Celebrities Who Have Appeared in Comic Books 9.3k VIEWS Comics are more popular than ever, and while some celebrities star in comic book movies, the celebrities on this list, loose...
34 Gay Stars Who Came Out to the Media 171.7k VIEWS Many queer celebrities choose to come out to the mainstream media. Some release official statements while others hold e...
300+ Famous People Who Went to Prep School 12.5k VIEWS Many of the most powerful people in the world went to prep school. The children of wealthy parents - often "old money&q...
37 Gay Celebrities Who've Come Out Since 2000 4.4M VIEWS Gay, bisexual, lesbian, and transexual individuals started to gain more support in the 2000s. Gay actors, writers, and music...
Famous People Who Have Had Skin Cancer 4.1k VIEWS Skin cancer is a serious disease, but one that is highly treatable if caught early. Many celebs who survived skin cancer hav...
Celebrities Who Had Their Appendix Removed 10.2k VIEWS An appendectomy is a common medical procedure, so it's no surprise there are so many famous people who had their appendix re...
#44 of 50 The Most Important LGBTQ+ Thinkers of All Time 340 VOTES From writers to philosophers to activists, there are plenty of LGBTQ+ thinkers whose thoughts and ideas have shaped the worl...
Celebrities with Learning Disabilities 120.9k VIEWS This list contains information about celebrities who have learning disabilities, loosely ranked by fame and popularity. Many...
99 Celebrities Who Went to Ivy League Schools 380.2k VIEWS Celebrities who went to Ivy League schools are those smarty pants actors, musicians, and other famous people in the entert...
60+ Famous People with Dyslexia 82.4k VIEWS List of Famous People with Dyslexia ranked by fame and popularity. Dyslexia is a disorder that effects one's ability to read...
50+ Celebrities Who Went to Yale 48.4k VIEWS This list contains information about celebrities who went to Yale University, loosely ranked by fame and popularity. Several...
Childhood Photos Of Famous TV Show Hosts 8.9k VIEWS Whether they're witty, engaging, compassionate, or controversial, talk show hosts stick with a generation. From the greatest...
Celebrity Couples Who Broke Up In 2018 92.3k VIEWS Welcome to celebrity breakups 2018, the definitive list of all the Tinseltown sweethearts who called it quits in 2018. Given...
Celebrities Who Are BFF with Their Moms 4.5k VIEWS Parents of celebrities aren't often recognized unless they are famous themselves, too. Obviously Goldie Hawn and Kate Hudson...

Anderson Cooper is also found on...