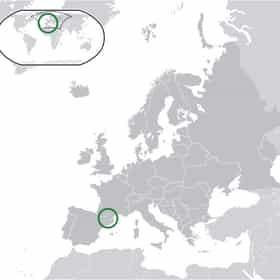 Andorra, officially the Principality of Andorra, also called the Principality of the Valleys of Andorra, is a sovereign landlocked microstate in Southwestern Europe, located in the eastern Pyrenees mountains and bordered by Spain and France. It is the sixth smallest nation in Europe, having an area of 468 km² and a population of ca. 85,000. Its capital, Andorra la Vella, is the highest capital city in Europe, at an elevation of 1,023 metres above sea level. The official language is Catalan, although Spanish, Portuguese, and French are also commonly spoken. Created under a charter in A.D. 988, the present Principality was formed in A.D. 1278. It is known as a principality as it is ... more on Wikipedia

Andorra is ranked on...

Andorra is also found on...

how long does a hangover last, list of domestic airlines in malaysia, what is the tallest building in europe, list of polish airlines, most cultured cities in the us 2017, good Pickachu nicknames, best country to live in europe, david o russell lily tomlin video, secret things to do at disneyland, man falling from height