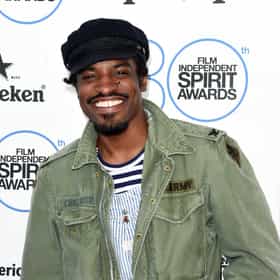 André Lauren Benjamin (born May 27, 1975), better known by his stage name André 3000 (formerly Dre), is an American musician and actor best known for being part of hip hop duo Outkast alongside fellow rapper Big Boi. As an actor, Benjamin has made appearances in a number of TV series and films, including Families, The Shield, Be Cool, Revolver, Semi-Pro, Four Brothers, and the lead role of Jimi Hendrix in All Is by My Side. In addition to music and acting, Benjamin has also been an entrepreneur. In the spring of 2008, he launched a clothing line called Benjamin Bixby. He has also been an advocate for animal rights. He is also known for his work on the Cartoon Network ... more on Wikipedia

#574 of 2,187 The Greatest Musical Artists of All Time 13.4M VOTES When VH1 polled fellow artists to name the greatest artists of all time, it seemed like a good idea---but in reality, the li...
#23 of 139 The Dopest Rappers of the '90s 240.6k VOTES The best '90s rappers and rap groups brought us some of the best rap songs of all time with artists like Tupac Shakur, Dr. D...
#10 of 200 The Best Rappers From Atlanta 31.7k VOTES From new artists to some of the greatest hip hop artists of all time, here are the best rappers from Atlanta. Including&nbsp...
#21 of 114 Rappers with the Best Voices, Ranked 34.9k VOTES When ranking the best rap artists, the rapper's voice is an important factor in determining which hip hop artists stand...
#20 of 192 The Most Respected Rappers, Ranked 40.7k VOTES When it comes to the rap game, it's all about respect. In other words, a rapper's career will only go so far if they aren't ...
#8 of 63 Rappers with the Best Rhymes, Ranked 11.6k VOTES When ranking the best rap artists, how a rapper rhymes is an important factor in determining which hip hop artists stan...
#3 of 43 Rappers with the Cleanest Image, Ranked 3.7k VOTES A majority of rappers don't have the cleanest image. Whether that's due to their upbringing or hardships throughout life, ha...
#1 of 60 60+ Unbelievable #MakeupTransformations 127.2k VOTES Makeup transformations (or #makeuptransformations, as you'll see it on Twitter et al.) is a fantastic new trend popping up o...
#3 of 35 Rappers with the Best Vocabulary, Ranked 4.1k VOTES When ranking the best rap artists, the rapper's vocabulary is an important factor in determining which hip hop artists ...
#63 of 144 The Best Neo Soul Artists 21.5k VOTES This neo soul artists list ranks the best neo soul singers and musicians by votes. This list of good neo soul groups and art...
#4 of 111 The Best Musical Artists From Georgia 2.9k VOTES Here are the best artists and bands from Georgia. The Peach State is also the birthplace of some of the world's greatest mus...
#2 of 149 The Best Southern Rappers of All Time 65.7k VOTES To many people, rap music is historically based in the Northeast, however, as the 1990s proved, Southern rappers are not onl...
#8 of 88 The Best Conscious Rappers 32.5k VOTES This conscious rappers list ranks the best conscious hip hop artists and groups by votes. This list of good conscious rapp...
All The Famous Musicians Erykah Badu Has Dated 7.7k VIEWS She's one of the most prominent artists in the R&B genre. Her career has spanned decades, and she's had numerous hit sin...
Rappers Who Have Cornrows 7.9k VIEWS Rappers try out a lot of hairstyles throughout their careers, so there are many rappers with cornrows. Some famous rap stars...
14 Rappers Who Have Won Awards for Acting 89.8k VIEWS One of the most glorious things that has ever happened in our lifetimes is seeing hardcore rappers like Ice Cube, Ice-T, and...
Rappers Who Wear Long Hair 13.4k VIEWS Rappers wear their hair in a variety of hairstyles and many rappers opt to wear their hair on the longer side. Rappers with ...
Male Celebrities Who Are 5’10" 26.8k VIEWS This list contains examples of male celebs who are 5'10" loosely ranked by fame and popularity. Standing above the aver...