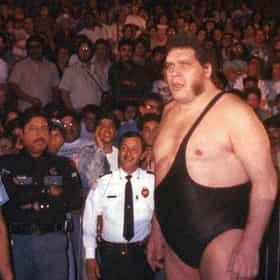 André René Roussimoff (May 19, 1946 – January 27, 1993), best known as André the Giant, was a French professional wrestler and actor.He famously feuded with Hulk Hogan, culminating at WrestleMania III in 1987. His best-remembered film role was that of Fezzik, the giant in The Princess Bride. His size was a result of gigantism caused by excess growth hormone, which later resulted in acromegaly. It also led to his being called "The Eighth Wonder of the World".In the World Wrestling Federation (WWF, now known as WWE), Roussimoff was a one-time WWF World Heavyweight Champion and a one-time WWF Tag Team Champion. In 1993, he was the inaugural inductee into the ... more on Wikipedia

lists about André the Giant

15 Stories That Prove André The Giant Was A Once-In-A-Lifetime Legend 169.2k views Andre the Giant - born Andre Roussimoff in Grenoble, France, in 1946 - was a true giant among men. He suffered from acromega...
Behind-The-Scenes Stories About André The Giant In ‘The Princess Bride’ 133.7k views The Princess Bride is a beloved film remembered for fencing, fighting, revenge, true love, miracles, and of course, Andr&eac...

André the Giant is ranked on...

André the Giant is also found on...