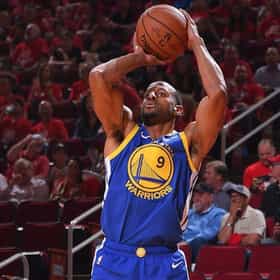 Andre Tyler Iguodala ( ig-wə-DAH-lə; born January 28, 1984) is an American professional basketball player for the Memphis Grizzlies of the National Basketball Association (NBA). The swingman was an NBA All-Star in 2012 and has been named to the NBA All-Defensive Team twice. He won three NBA championships with the Golden State Warriors, and was named the NBA Finals Most Valuable Player (MVP) in 2015. He was also a member of the United States national team at the 2010 FIBA World Championship and 2012 Summer Olympics, winning the gold medal both times. Iguodala played college basketball with the Arizona Wildcats. After earning first-team all-conference honors in the Pac-10 (known now as ... more on Wikipedia

Andre Iguodala is ranked on...

Andre Iguodala is also found on...