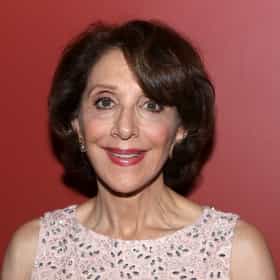 Andrea Louise Martin (born January 15, 1947) is a Canadian-American actress, singer, author and comedian, best known for her work in the television series SCTV and Great News. She has appeared in films such as Black Christmas (1974), Wag the Dog (1997), Hedwig and the Angry Inch (2001), My Big Fat Greek Wedding (2002), My Big Fat Greek Wedding 2 (2016), and Little Italy (2018). She has also lent her voice to the animated films Anastasia (1997), The Rugrats Movie (1998) and Jimmy Neutron: Boy Genius (2001). Martin has been equally prolific in the world of theater, winning Tony Awards for both My Favorite Year and the 2013 revival of Pippin. Martin also appeared on Broadway in Candide, ... more on Wikipedia

Andrea Martin is ranked on...

#339 of 408 The Funniest Stand Up Comedians Of All Time 1M VOTES A ranked list of the best stand up comedians in the history of the art form. First and foremost, all of the people on this l...
#61 of 85 The Best Broadway Stars of the 21st Century 11.2k VOTES This list ranks all of the greatest stars to have performed on Broadway during the 21st century, young and old, male and f...
#68 of 85 The Best Celebrity Cameos In 'SpongeBob SquarePants' 16.2k VOTES SpongeBob SquarePants has been delighting audiences with fresh levels of absurdity since 1999. While the regular cast i...
#107 of 294 The Funniest Female Comedians of All Time 253.5k VOTES The funniest female comedians star on our favorite sitcoms, perform standup at the top comedy clubs and best of all, make us...
#48 of 83 The Best Female Broadway Stars of the 21st Century 16.2k VOTES Female performers have taken Broadway by storm in the 21st century, with many talented women drawing audiences night after...
#103 of 129 The Greatest Broadway Stars of All Time 48.1k VOTES These Broadway stars have been the biggest audience draws in the past, and many are sure to be in the future. All the thea...
Famous People Whose Last Name Is Martin 18k VIEWS Being a fairly common name, it's no surprise there are a lot of famous people with the last name Martin. Do you recognize al...
Famous People Named Andrea 13.2k VIEWS If your name is Andrea, then you're in some great company. Here's our list of the most famous people named Andrea, including...
18 Famous Actresses Who Won Tonys for Musicals 3.9k VIEWS List of Famous Actresses Who Won Tonys for Musicals. Several famous Hollywood actresses have won Tony Awards for their perfo...

Andrea Martin is also found on...