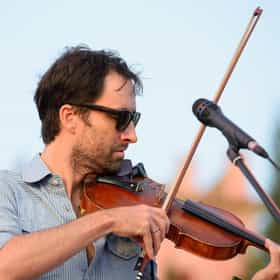 Andrew Wegman Bird (born July 11, 1973) is an American indie rock multi-instrumentalist, singer, and songwriter. Since 1996, he has released 15 studio albums, as well as several live albums and EPs, spanning various genres including swing music, indie rock, and folk music. He is primarily known for his unique style of violin playing, accompanied by loop and effect pedals, whistling, and voice. In the '90s, he appeared in several jazz ensembles, including Squirrel Nut Zippers and Kevin O'Donnell's Quality Six, before starting Andrew Bird's Bowl of Fire, which released three albums between 1998 and 2001. Weather Systems (2003) was his first solo album upon leaving the Bowl of Fire to ... more on Wikipedia

The Best Andrew Bird Albums of All Time 185 votes Andrew Bird is a talented singer and songwriter, not to mention multi-instrumentalist. Here, you can check out a complete li...

Andrew Bird is ranked on...

#213 of 329 The Best Bands With Animal Names 32.8k VOTES The best bands with animals in their names criss-cross the music world with offerings from music genres like indie rock, cla...
#6 of 64 Coachella 2012 Performances 266 VOTES Rankings of the artists and bands who played Coachella 2012, voted on by Coachella attendees (no cheating if you weren't the...
#152 of 596 The Best Indie Bands & Artists 152.2k VOTES Before the genre became mainstream (which in itself is paradoxical) indie bands meant that a particular group was signed to ...
#91 of 102 The Best Musical Artists From Illinois 5.6k VOTES Here are the best artists and bands from Illinois. Illinois has a vast musical heritage, and much of it centers around Chica...
#277 of 344 The Best Americana Bands & Artists of All Time 19k VOTES Americana artists are by nature are traditionalist American musicians who infuse roots music - which includes elements of ro...
#549 of 679 The Best Alternative Bands/Artists 197.2k VOTES At the end of the 1980s, at the peak of glam rock and hair metal, a new genre began to emerge from the underground. Since it...
#54 of 67 The Best Folk Rock Bands of All Time 50k VOTES While folk music has been around for as long as spoken word music itself, folk rock rose became popular during the 1960s and...
Famous People Named Andrew 56.8k VIEWS List of famous people named Andrew, along with photos. How many celebrities named Andy can you think of? The famous Andrews ...

Andrew Bird is also found on...