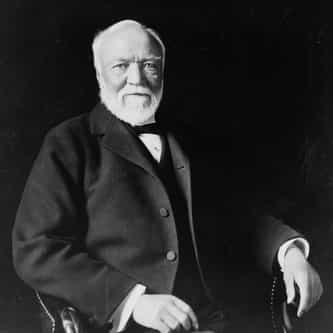 Andrew Carnegie kar-NAY-gee (November 25, 1835 – August 11, 1919) was a Scottish-American industrialist, business magnate, and philanthropist. Carnegie led the expansion of the American steel industry in the late 19th century and became one of the richest Americans in history. He became a leading philanthropist in the United States and in the British Empire. During the last 18 years of his life, he gave away $350 million (conservatively $65 billion in 2019 dollars, based on percentage of ... more on Wikipedia

8.6k readers Robbing From The Poor To Give To The Rich: Andrew Carnegie And His Mega-Legacy

Andrew Carnegie IS LISTED ON