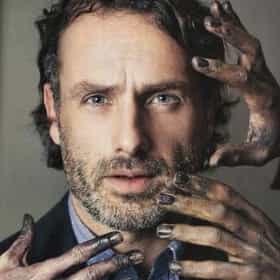 Andrew James Clutterbuck (born 14 September 1973), better known by his stage name Andrew Lincoln, is an English actor. His first major role was in the BBC drama This Life (1996–1997). Lincoln later portrayed Simon Casey in the Channel 4 sitcom Teachers (2001–2003) and Mark in the Christmas-themed romantic comedy film Love Actually (2003). Beginning in 2010, Lincoln gained international fame for his portrayal of Rick Grimes, the lead character on the hit AMC post-apocalyptic horror television series The Walking Dead. For his portrayal of Rick Grimes, Lincoln won the Saturn Award for Best Actor on Television in 2015 and 2017, respectively. He departed the cast of The Walking Dead in ... more on Wikipedia

Andrew Lincoln is ranked on...

#162 of 194 The Hottest Men Over 40 1.1M VOTES The hottest men in Hollywood? Turns out, the older they get, the more we like them! Like fine wines, tweens, and your favori...
#107 of 282 People who voted for Andrew Lincoln... also upvote The Walking Dead on The Best TV Shows to Binge Watch also upvote Boston Market on The Top Fast Food Brands The Best (Male) Actors Working Today 1.5M VOTES The best actors working today include Hollywood legends, Academy Award winners and many of the top up and coming actors in t...
#656 of 1,151 The Best Actors in Film History 2.2M VOTES The best actors ever are ranked here in this list of the best actors in film history. These are the greatest actors ever to ...
#220 of 332 The Greatest Actors Who Have Never Won an Oscar (for Acting) 454k VOTES There are many actors who haven't won an Oscar. For 95 percent of the acting population, there is probably a good reason the...
#703 of 2,003 The Greatest Actors & Actresses in Entertainment History 1.7M VOTES The best actors and actresses of all time, male and female, ranked by film fans worldwide. This list of greatest actors and ...
#26 of 40 The Top Casting Choices for the Next James Bond Actor 232k VOTES Who is going to be the new James Bond actor now that Daniel Craig doesn't want to be 007 in the next James Bond outing? Sinc...
#166 of 255 Actors You Would Watch Read the Phone Book 316.3k VOTES List of actors who you would watch do something as mundane as read the phone book. Some of these guys are leading men, consi...
#8 of 66 The Top Fantastic Four Reboot Casting Choices 18.8k VOTES The Fantastic 4 needs another reboot ASAP. That said, it's time to recast the Fantastic 4 ! This Fantastic 4 casting li...
#9 of 13 What The Walking Dead Cast Looks Like In A World Without The Zombie Apocalypse 568 VOTES Have you ever wondered what the cast of The Walking Dead look like when they're not caked in dried blood? Or ...
#18 of 54 The Best Actors in Live-Action Comic Book TV Shows 21k VOTES These are the actors that found that sweet spot, that portrayed these modern day gods and goddesses right. They brought our ...
#7 of 14 You Need to See These Yearbook Photos of the Cast of The Walking Dead 58.1k VOTES This is the moment all you zombie lovers out there have been waiting for! If you love The Walking Dead, then you'll def...
What The Cast Of 'The Walking Dead' Thinks About The Series 6.4k VIEWS The Walking Dead has been going strong since Halloween 2010, although the narrative has changed significantly since the...
Famous People Named Andrew 55.9k VIEWS List of famous people named Andrew, along with photos. How many celebrities named Andy can you think of? The famous Andrews ...
#1 of 20 The Best The Walking Dead Actors 920 VOTES When it comes to bringing those delightfully creepy chills year after year, no one does it better than the actors on The Wal...

Andrew Lincoln is also found on...