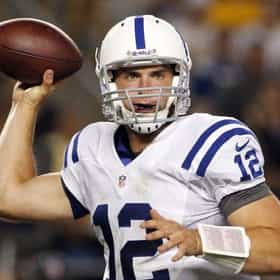 Andrew Austen Luck (born September 12, 1989) is a former American football quarterback who played all seven years of his professional career with the Indianapolis Colts of the National Football League (NFL). Luck played college football for the Stanford Cardinal, where he won the Maxwell Award and Walter Camp Award as college football's player of the year and was twice recognized as an All-American. He was the runner-up for the Heisman Trophy in both 2010 and 2011, and was named the Offensive Player of the Year in the Pac-12 Conference in both 2010 and 2011. CBS Sports draft analyst Rob Rang called Luck the best prospect he had ever scouted, while the Kansas City Star put him in line ... more on Wikipedia

Andrew Luck is ranked on...

Andrew Luck is also found on...