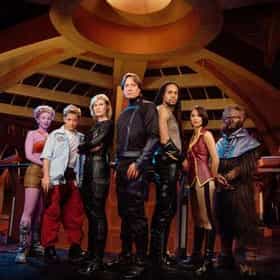 Andromeda is a Canadian/American science fiction television series, based on unused material by the late Star Trek creator Gene Roddenberry, developed by Robert Hewitt Wolfe, and produced by Roddenberry's widow, Majel Barrett. It starred Kevin Sorbo as High Guard Captain Dylan Hunt. The series premiered on October 2, 2000, and ended on May 13, 2005. Andromeda was filmed in Vancouver, British Columbia, Canada, and produced by Tribune Entertainment and Fireworks Entertainment. It was distributed by Global TV in Canada and syndicated in the United States on WGN and other channels. It was picked up by the Sci-Fi Channel in the U.S. halfway through season four. Andromeda is one of two TV ... more on Wikipedia

Andromeda is ranked on...

#45 of 310 People who voted for Andromeda... also upvote Star Trek Franchise on The Best Movies Based on TV Shows also upvote Riddick Franchise on The Greatest Sci-Fi Movies of All Time The Best Sci Fi Television Series of All Time 936.2k VOTES Here is a list of the best sci-fi shows and best sci-fi series of all time, as ranked by hundreds of Ranker voters. Thi...
#42 of 74 The Most Exciting Sci-Fi Series Ever Made 3k VOTES The top sci-fi TV shows ever aired are some of the most exciting and thought-provoking to watch on television, but which is ...
#165 of 273 The Greatest Supernatural Shows of All Time 455.7k VOTES The very best supernatural shows on television, ranked from best to worst. Popular supernatural TV shows have been a staple ...
#7 of 99 The Greatest TV Shows Set in the Future 2k VOTES Blast forward in time and help rank the best TV shows set in the future. Since the early days of television, futuristic them...
#8 of 35 People who voted for Andromeda... People outside of the US are 4x more likely to vote for this The Best Space Opera TV Shows 4.1k VOTES The very best space opera shows on television, ranked from best to worst. This list of the greatest space opera shows also i...
#27 of 44 The Best Shows & Movies Set in the Future 238 VOTES If there's one commonality throughout most of science fiction, it's the setting taking place in the future. While that's not...

Andromeda is also found on...