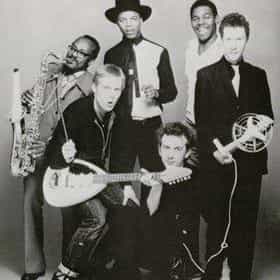 Andy Cox (born Andrew Cox, 25 January 1956) is a British guitarist born in Birmingham, who along with Dave Wakeling, founded The Beat in 1978.The Beat achieved eight Top 40 singles and three hit albums in the UK before announcing their break up in 1983. Some of their notable hits included "Mirror in the Bathroom", "Hands Off She's Mine" and "Can't Get Used to Losing You". In 1985 he joined fellow Beat member David Steele and singer Roland Gift, to form Fine Young Cannibals. In 1988, while Fine Young Cannibals were on hiatus, Cox and Steele released the instrumental house music single, "Tired of Getting Pushed Around", under the name of Two Men, A ... more on Wikipedia

Andy Cox is ranked on...

Famous People Whose Last Name Is Cox 5.7k VIEWS Being a fairly common name, it's no surprise there are a lot of famous people with the last name Cox. Do you recognize all t...

Andy Cox is also found on...