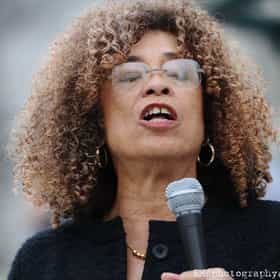 Angela Yvonne Davis (born January 26, 1944) is an American political activist, academic, and author. She emerged as a prominent counterculture activist in the 1960s working with the Communist Party USA, of which she was a member until 1991, and was involved in the Black Panther Party during the Civil Rights Movement.Davis is a professor emerita at the University of California, Santa Cruz, in its History of Consciousness Department. She is also a former director of the university's Feminist Studies department. Her research interests are feminism, African-American studies, critical theory, Marxism, popular music, social consciousness, and the philosophy and history of punishment and ... more on Wikipedia

Angela Davis is ranked on...

#155 of 247 The Best Female Authors of All Time 29.3k VOTES Some of the most powerful, influential women in history were authors, writers, and poets. What better way to make your poi...
#19 of 47 The Greatest Black Female Authors in the History of Literature 835 VOTES Looking for your next engrossing read? Look no further. This list features the most famous black female authors of all time,...
Famous People Whose Last Name Is Davis 18.2k VIEWS Being a fairly common name, it's no surprise there are a lot of famous people with the last name Davis. Do you recognize all...
Famous People Named Angela 24.3k VIEWS If your name is Angela, then you're in some great company. Here's our list of the most famous people named Angela, including...
#15 of 25 The Best Life Magazine Covers 1.8k VOTES List of the most memorable Life Magazine covers, featuring the coolest photographs, sexiest celebrity shots, and most inno...

Angela Davis is also found on...