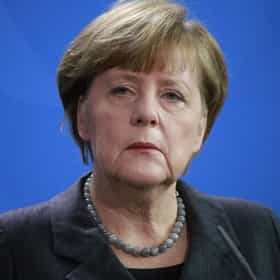 Angela Dorothea Merkel (, German: [aŋˈɡeːla ˈmɛɐ̯kl̩]; née Kasner; born 17 July 1954) is a German politician serving as Chancellor of Germany since 2005. She served as the leader of the centre-right Christian Democratic Union (CDU) from 2000 to 2018. Merkel has been widely described as the de facto leader of the European Union, the most powerful woman in the world, and, following the election of Donald Trump as U.S. President, by many commentators as the new leader of the Free World.Merkel was born in Hamburg in then-West Germany and moved to East Germany as an infant when her father, a Lutheran clergyman, received a pastorate in Perleberg. She obtained a doctorate in quantum ... more on Wikipedia

Angela Merkel is ranked on...

#982 of 2,831 The Most Influential People of All Time 2.4M VOTES This is a list of the most influential people of all of human history. This means that the individuals on this list have had...
#132 of 322 The Most Inspiring (Non-Hollywood) Female Role Models 83.6k VOTES Who run the world? Girls! After compiling this list, we're positive that ladies all over the planet are kicking ass and ta...
#158 of 571 People who voted for Angela Merkel... People in the South are 2x more likely to vote for this Things That Are Not As Cool As People Think They Are 1.1M VOTES Jorts are the dumbest things I've ever seen. Next to Toms shoes. Next to the Toyota Prius. Next to d-bags taking pictures of...
#38 of 111 Famous Politicians You'd Want to Have a Beer With 135.6k VOTES Which likable politicians would be fun to have a few drinks with? Many politicians market themselves as regular folks you'd ...
#177 of 479 Famous Women You'd Want to Have a Beer With 752.9k VOTES If given the opportunity to sit down for a beer with any famous female figure, which famous women would you most want to get...
#868 of 1,472 The Greatest Minds of All Time 736.2k VOTES List of the Greatest Minds of All Time, throughout history. This list represents the most influential thinkers across variou...
#8 of 61 The Most Influential Women Of 2018 57.2k VOTES The greatest women in history change the game in terms of the power and the presence women have in society. From inspiration...
#72 of 267 The Most Powerful Women Of All Time 176.2k VOTES This is a list of the most powerful women of all time, as ranked by experts and by fans alike. From world leaders to celeb...
#55 of 65 The Coolest Female Firsts in History 11.6k VOTES Did you know the first person to win an Emmy Award was a lady?! That's right. Lots of famous women in history have achieved ...
#156 of 165 If You Fought To The Death, Who Would You Want By Your Side? 71k VOTES Fighting to the death. You know you’ve thought about it; pop culture has definitely made you consider it. In the e...
#4 of 51 The Most Important Politicians Of 2019 17.4k VOTES Voting is an integral part of any democracy. And now, you have the power to vote for the individuals you believe to be the m...
#421 of 421 The Hottest Women Over 40 in 2013 602.7k VOTES This is an Ultimate List of the hottest women over 40. It's hard to believe that some of these well known women are over 40,...
#586 of 1,452 Celebrity Death Pool 2018 477.7k VOTES Welcome to Celebrity Death Pool 2018! In increasingly uncertain times, there remains one constant in life - we all die. Cele...
#10 of 95 The Most Influential Women of 2019 49.2k VOTES UPDATED: Check out the most influential women of 2020! From inspirational female celebrities to businesswomen to political...
#17 of 41 The Most Influential People in 2018 29.6k VOTES From Oscar winners and musicians to political figures and activists, this list compiles the most influential people of ...
#46 of 87 Guests You Hope to See on Late Show with Stephen Colbert 8.2k VOTES Late Show signed back on with Stephen Colbert at the helm in the summer of 2015, prime presidential election season, and the...
#21 of 30 Real World Avengers Villains 5.2k VOTES The Avengers are used to assembled to battle every major threat facing the Marvel Universe. What about our universe, though?...
#26 of 52 Who Should Be TIME Magazine's Person of the Year 2015? 9.9k VOTES TIME magazine is currently polling for who should be its Person of the Year in 2015, with a wide selection of world lea...
#38 of 55 The Most Influential People of 2012 7.2k VOTES The most influential people of 2012 include world leaders, CEOs, athletes, actors, musicians and many others who made an imp...
#38 of 38 Who Do You Think Is Really Making Decisions In The White House? 2.4k VOTES On August 13, 2018, former White House aide Omarosa Manigault Newman released a recording of President Trump reacting t...
#30 of 49 The Most Influential Women Of 2020 476 VOTES In 2020, inspirational female leaders are found in every aspect of business, philanthropy, politics, and entertainment. Some...
Famous Bilderberg Group Members 62.3k VIEWS List of Famous Bilderberg Members ranked by fame and popularity. The Bilderberg Group is an annual conference comprised of p...
World Leaders (Allegedly) In The Illuminati 352.3k VIEWS It's not just politicians and leaders in the United States who are rumored to be in the Illuminati. Numerous prime ministers...
#35 of 51 The Most Important Female World Leaders of All Time 1.5k VOTES Throughout history, there have been many female world leaders who have made a profound impact on the world. From presid...
Female Presidents Currently in Office 64k VIEWS While women rulers have led great empires as hereditary monarchs since ancient times, the first appointed female head of sta...
Famous People Named Angela 24k VIEWS If your name is Angela, then you're in some great company. Here's our list of the most famous people named Angela, including...
26 Famous ISTJs 119.8k VIEWS Did you know that many of the most popular celebrities, politicians, and entrepreneurs are ISTJs? ISTJ stands for Introverte...

Angela Merkel is also found on...