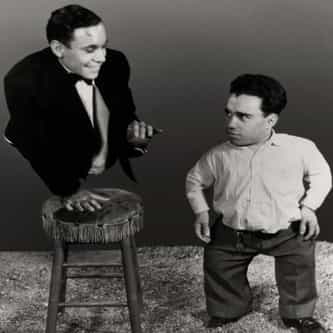 Angelo Salvatore Rossitto (February 18, 1908 – September 21, 1991) was an American dwarf actor and voice artist. He had dwarfism and was 2'11" (89 cm) tall, and was often billed as Little Angie or Moe. Angelo first appeared in silent films opposite Lon Chaney and John Barrymore. On screen he portrayed everything from dwarfs, midgets, gnomes and pygmies as well as monsters, villains and aliens, with appearances in more than 70 films. Rossitto was born in Omaha, Nebraska and discovered ... more on Wikipedia

Angelo Rossitto IS LISTED ON