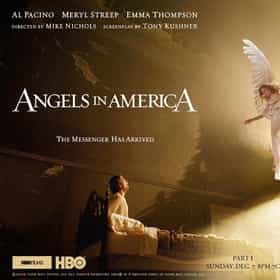 Angels in America is a 2003 HBO miniseries adapted from the play of the same name by Tony Kushner. Kushner adapted his original text for the screen, and Mike Nichols directed. Set in 1985, the film revolves around six disparate New Yorkers whose lives intersect. At its core, it has the fantastical story of Prior Walter, a gay man dying of AIDS who is visited by an angel. The film explores a wide variety of themes, including Reagan era politics, the spreading AIDS epidemic, and a rapidly changing social and political climate. HBO broadcast the film in various formats: two 3-hour chunks that correspond to "Millennium Approaches" and "Perestroika", as well as six ... more on Wikipedia

Angels in America is ranked on...

Angels in America is also found on...