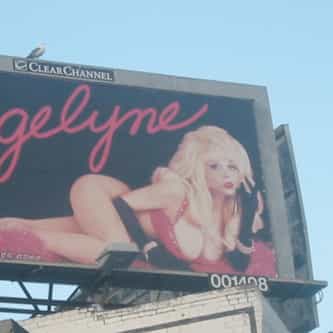 Angelyne (born Ronia Tamar Goldberg, October 2, 1950) is an American singer, actress, personality and model who came to prominence in 1984 after the appearance of a series of iconic billboards in and around Los Angeles, California which read only "Angelyne" and pictured her posing suggestively. These caught the attention of local media outlets, and soon she received a number of offers for film roles, magazine interviews, and television show appearances. The main trademark of her ... more on Wikipedia