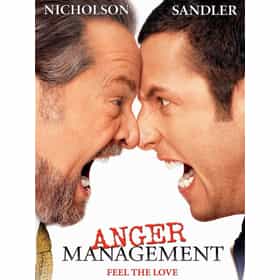 Anger Management is a 2003 American slapstick comedy film directed by Peter Segal, written by David S. Dorfman, and starring Adam Sandler, Jack Nicholson, and Marisa Tomei . It was produced by Revolution Studios in association with Sandler's production company Happy Madison Productions and was distributed by Columbia Pictures. When an annoying passenger causes Dave Buznik to lose his temper on an airline flight, he is sentenced to anger management classes. Buznik learns his therapist is the passenger, who proves to have a rather interventionist style of therapy. ... more on Wikipedia

Anger Management is ranked on...

Anger Management is also found on...