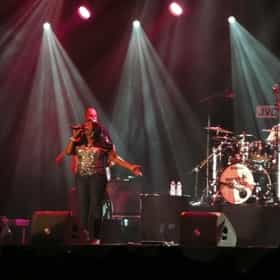 Angie Stone (born Angela Laverne Brown; December 18, 1961) is an American singer, songwriter, actress, and record producer. She rose to fame in the late 1970s as member of the hip hop trio The Sequence. Soon after, Stone began working with futuristic rap group Mantronix and singer Lenny Kravitz. In the early 1990s, she became a member of the R&B trio Vertical Hold. In 1999, Stone released her solo debut Black Diamond on Arista Records, which was certified gold and spawned the R&B number-one hit "No More Rain (In This Cloud)". After transitioning to J Records, she released another gold-seller, Mahogany Soul (2001), which included the hit single "Wish I Didn't Miss ... more on Wikipedia

The Best Angie Stone Songs 73 votes List of the top Angie Stone songs, as voted on by fans like you. This poll includes all Angie Stone hits, but true fans know...

Angie Stone is ranked on...

#16 of 101 The Best Musical Artists From South Carolina 919 VOTES Here are the best artists and bands from South Carolina. Particularly known for its influences in the bluegrass, country, R&...
#14 of 144 People who voted for Angie Stone... are 17x more likely to vote for Jill Scott on this list are 15x more likely to vote for Maxwell on this list The Best Neo Soul Artists 21.6k VOTES This neo soul artists list ranks the best neo soul singers and musicians by votes. This list of good neo soul groups and art...
#38 of 52 The Greatest Black Female Soul Singers 8.4k VOTES Their songs are iconic. Their voices are unforgettable. These are the greatest black female soul singers of all time, as ran...
Famous People Named Angela 24.5k VIEWS If your name is Angela, then you're in some great company. Here's our list of the most famous people named Angela, including...
Celebrities Who Started as Backup Singers 183.8k VIEWS This list of celebrities who started as backup singers is loosely ranked by fame and popularity. Several now-famous musician...

Angie Stone is also found on...