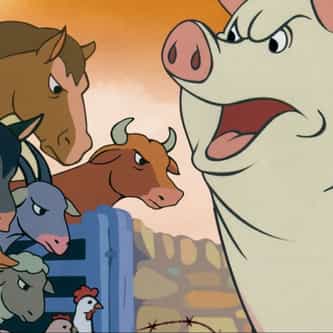 Animal Farm is a 1954 British animated drama film by Halas and Batchelor, based on the book Animal Farm by George Orwell. It was the first British animated feature to be released. The C.I.A. paid for the filming, part of the U.S. cultural offensive during the Cold War, and influenced how Orwell's ideas were to be presented. The CIA initially funded Louis de Rochemont to begin work on a film version of Orwell's work and he hired Halas & Batchelor, an animation firm in London that had ... more on Wikipedia