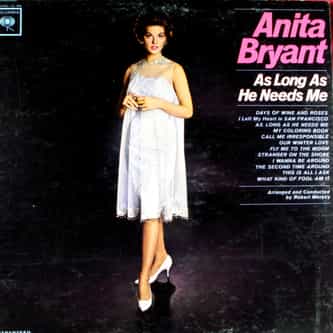 Anita Jane Bryant (born March 25, 1940) is an American singer and anti-gay rights activist. She scored four Top 40 hits in the United States in the late 1950s and early 1960s, including "Paper Roses" which reached No. 5 on the charts. She was also a former Miss Oklahoma beauty pageant winner, and was a brand ambassador from 1969 to 1979 for the Florida Citrus Commission which marketed orange juice. She was voted the most admired woman in America three years in a row by Good ... more on Wikipedia

Anita Bryant IS LISTED ON