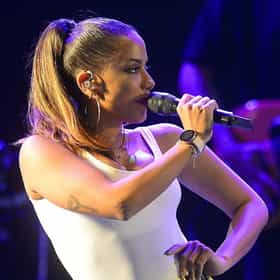 Larissa de Macedo Machado, known by her stage name Anitta, is a Brazilian recording artist, songwriter and dancer. In 2010, she signed a contract with the label Furacão 2000. Anitta won international fame in 2013 after releasing the song "Show das Poderosas" in Brazil, Mexico, Colombia, Chile, Uruguay, Spain and Portugal, and in parts of north America, and in November 2014 performed at the Latin Grammy Award becoming the youngest Latin American singer to perform at the awards, but received no award. Anitta is fluent in three languages, English, Spanish and Portuguese. She signed a millionaire contract with Warner Music label in January 2013 and released their first ... more on Wikipedia

Anitta is ranked on...

#254 of 275 The Sexiest Musical Artists of All Time 351.2k VOTES If you've got it, flaunt it, and that's what these rock stars do. And for that they've been rewarded with the honor of sexie...
#13 of 174 Every Artist On The Coachella 2020 Lineup, Ranked 19.8k VOTES UPDATE: Due to safety concerns related to the Coronavirus outbreak, Coachella 2020 has been postponed to the weekends o...
Famous Aries Female Celebrities 69k VIEWS Aries tend to be charismatic people who are confident and bold in their choices - all qualities that give you an edge in you...
#59 of 234 The Best Latin Pop Artists 13k VOTES Latin pop music is exactly what you'd expect it to be: pop music that has Latin influence. While this is fairly obvious, onl...

actors named chase, nicky barnes net worth, guys named shannon, is glue made from horses, for honor full roster, Shadow of the Colossus lore, how old is morgz, is nba youngboy dying tomorrow, what is a variety show, videos you will never see