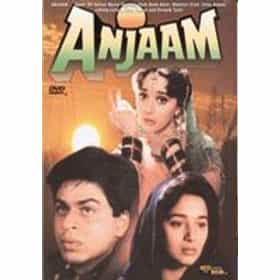 Anjaam is a Bollywood thriller drama movie released on 22 April 1994. Directed by Rahul Rawail, it stars Madhuri Dixit, Shahrukh Khan, Deepak Tijori, Himani Shivpuri, Tinnu Anand, Kalpana Iyer and Kiran Kumar. The film's music was composed by Anand-Milind with lyrics written by Sameer. The film is about the consequence / result of the slightest mistake and how it can ruin your whole life. It also focuses on the atrocities committed against women. This was the first time that Madhuri Dixit and Shahrukh Khan were paired together. Khan and Dixit were praised for their respective performances. Madhuri Dixit earned a Filmfare Best Actress nomination for her role but won the award for her ... more on Wikipedia

Anjaam is ranked on...

Anjaam is also found on...