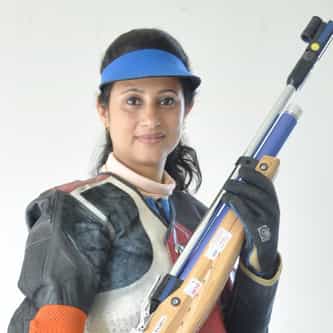 Anjali Bhagwat (born 5 December 1969) is a professional Indian shooter. She became the World Number One in 10m Air Rifle in 2002. She also won her first World Cup Final in Milan, in 2003, with a score of 399/400. Anjali won the ISSF Champion of Champions award and is the only Indian to win the ISSF Champions' Trophy in Air Rifle Men & Women mixed event at Munich in 2002. She has represented India in three consecutive Olympics, and was a finalist in the 2000 Sydney Olympics, again a ... more on Wikipedia