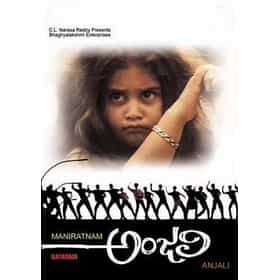 Anjali is a 1990 Tamil language feature film directed by Mani Ratnam. It stars Raghuvaran, Revathi, Master Tarun, Baby Shruti and Baby Shamili in the leading roles. The background score and soundtrack was composed by Ilaiyaraaja, his 500th film. Anjali deals with the story of a dying mentally disabled child, and the emotional trauma experienced by her family. The film was dubbed into Hindi and Telugu and released under the same name. Anjali was critically acclaimed, winning three National Film Awards. It was chosen as India's official entry to the Oscars in 1991. ... more on Wikipedia

Anjali is ranked on...

Anjali is also found on...