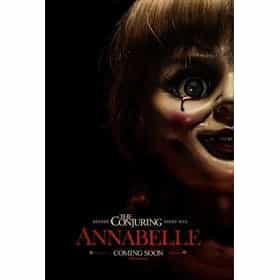 Annabelle is a 2014 American supernatural psychological horror film directed by John R. Leonetti, produced by James Wan, and written by Gary Dauberman. It is both a prequel to and spin-off of The Conjuring and was inspired by a story of a doll named Annabelle told by Ed and Lorraine Warren. The film stars Annabelle Wallis, Ward Horton, and Alfre Woodard. The film was released worldwide on October 3, 2014. Annabelle premiered at the TCL Chinese Theatre in Hollywood, Los Angeles, United States, on September 29, 2014. The film received mixed reviews upon release; nevertheless, it grossed over $255 million against its $6.5 million production budget, making it one of the highest grossing ... more on Wikipedia

Annabelle is ranked on...

#114 of 804 The Best Horror Movies Of All Time 1.1M VOTES Horror movies, ranked by adrenaline junkies worldwide. Anyone can vote on this CrowdRanked list, and can even add your own f...
#50 of 160 The Best Movies of 2014 66.1k VOTES Sure there are the Oscars, Golden Globes, and a number of other award ceremonies that hand out trophies to movies that are v...
#72 of 114 The Best Intelligent Horror Movies 668.1k VOTES If you think horror movies are nothing more than slashers slashing, supernatural creatures wreaking havoc, and gallons of th...
#10 of 66 The Best Demonic Possession Movies 33.4k VOTES There’s nothing more horrifying than watching a movie about a person who’s possessed by a demon. What is it about the though...
#19 of 32 The Most Disappointing Movies of 2014 8.9k VOTES One of the worst feelings is walking out of a theater having been let down by a movie you've been waiting months to see. All...
#28 of 143 The Best Horror Movies Of The 2010s, Ranked 43.9k VOTES These horror films from the 2010s have got the best scares, screams, and monsters of the decade. Jordan Peele came onto the ...
#98 of 118 The Best Horror Movies of the 21st Century 26k VOTES A list of the Best Horror Movies of the 21st Century. Looking for some recently-made horror movies to enjoy? This list provi...
#19 of 40 The Best Period Horror Movies, Ranked 3.9k VOTES This list contains information on the best period horror movies, ranked from best to worst by user votes. The best period ho...
#67 of 505 The Scariest Movies Ever Made 549.3k VOTES These are the all-time scariest movies ever made. Many of these movies have become part of the pop culture lexicon due to th...
#3 of 38 The Best Horror Movies of 2014 4.1k VOTES Audiences all across the country (and the globe) were frightened in theaters in 2014, thanks to the best horror movies out...
Every Time Ed & Lorraine Warren Were Exposed As Total Frauds 745.3k VIEWS Paranormal research has steadily gained more mainstream acknowledgement since the 1970s, following the release of books and ...
#7 of 20 What to Watch If You Love Unfriended 63 VOTES Looking for good shows and movies like Unfriended? You're not alone. Ever since The Blair Witch Project stormed in...