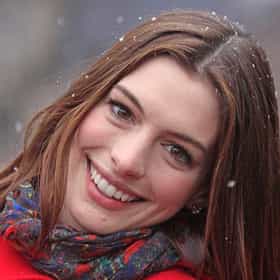 Anne Jacqueline Hathaway (born November 12, 1982) is an American actress. One of the highest-paid actresses in the world in 2015, she has received multiple awards, including an Academy Award, a Primetime Emmy Award, and a Golden Globe. Her films have earned $6.4 billion worldwide, and she appeared in the Forbes Celebrity 100 list in 2009. Hathaway graduated from Millburn High School in New Jersey, where she acted in several plays. As a teenager, she was cast in the television series Get Real (1999–2000) and made her breakthrough as the protagonist in her debut film, the Disney comedy The Princess Diaries (2001). Hathaway made a transition to adult roles with the 2005 dramas Havoc and ... more on Wikipedia

The Very Best Anne Hathaway Movies 8.3k votes List of the best Anne Hathaway movies, ranked best to worst with movie trailers when available. Audiences have seen Anne Hat...
Anne Hathaway Loves and Hookups 15k views Who is Anne Hathaway dating? Many famous men have dated Anne Hathaway, and this list will give you more details about these ...
Why Do People Hate Anne Hathaway? 3.4k views She's an Oscar and Emmy-winning actress, a box office star whose films have grossed over $2 billion, and a philanthropist wh...
All The Love Interests In Anne Hathaway Movies, Ranked 127 votes We’re ranking all of Anne Hathaway’s movie love interests so far. Over the years, Anne’s had the unique opportunity to play ...

Anne Hathaway is ranked on...

Anne Hathaway is also found on...