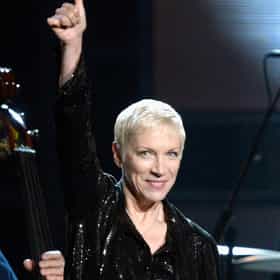 Ann Lennox OBE (born 25 December 1954) is a Scottish singer-songwriter, political activist and philanthropist. After achieving moderate success in the late 1970s as part of the new wave band The Tourists, she and fellow musician David A. Stewart went on to achieve major international success in the 1980s as Eurythmics. With a total of eight Brit Awards, which includes being named Best British Female Artist a record six times, Lennox has been named the "Brits Champion of Champions".Lennox embarked on a solo career in 1992 with her debut album, Diva, which produced several hit singles including "Why" and "Walking on Broken Glass". To date, she has released ... more on Wikipedia

Annie Lennox is ranked on...

Annie Lennox is also found on...