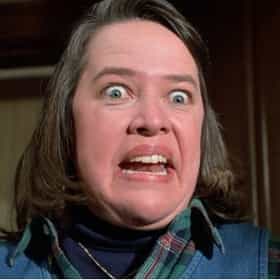 Anne Marie Wilkes Dugan, usually known as Annie Wilkes, is a character in the 1987 novel Misery, by Stephen King. In the 1990 film adaptation of the novel, Annie Wilkes was portrayed by Kathy Bates, who won the Academy Award for Best Actress for her portrayal. The American Film Institute included Annie Wilkes in their "100 Heroes and Villains" list, ranking her as the 17th most iconic villain in film history. A nurse by training, she has become one of the stereotypes of the nurse as a torturer and angel of death. ... more on Wikipedia

Annie Wilkes is ranked on...