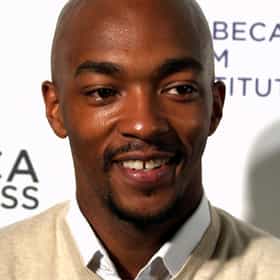 Anthony Dwane Mackie (born September 23, 1978) is an American actor. He has been featured in films, television series and Broadway and Off-Broadway plays, including Ma Rainey's Black Bottom, Drowning Crow, McReele, A Soldier's Play and Carl Hancock Rux's Talk, for which he won an Obie Award in 2002. In 2002, he was featured in Eminem's film debut, 8 Mile. He was nominated for Independent Spirit Award for Best Actor for his role in Brother to Brother. His second nomination was for Best Supporting Actor at the 2009 Independent Spirit Awards for his role in The Hurt Locker. He achieved global recognition with his portrayal of Sam Wilson / Falcon / Captain America in the Marvel Cinematic ... more on Wikipedia

Anthony Mackie is ranked on...

#308 of 329 The Greatest Actors Who Have Never Won an Oscar (for Acting) 469.8k VOTES There are many actors who haven't won an Oscar. For 95 percent of the acting population, there is probably a good reason the...
#29 of 258 The Best Marvel Movie Actors Ever 634.1k VOTES Ah Marvel movies. It began in 1944 with serialized films of Captain America and 70 years later, are one of the biggest, most...
#234 of 265 The Greatest Male Celebrity Role Models 107.3k VOTES Male celebrities as role models... what are we looking for? Maybe someone who knows how to lead, be a good team member, or h...
#21 of 56 People who voted for Anthony Mackie... also upvote Ultron on The Greatest Marvel Villains & Enemies Ever also upvote Captain America Franchise on The Best Movies Based on Marvel Comics The Best Marvel Superhero Movie Actors 103.1k VOTES Comic book movies are especially hard to cast because there are so many die hard fans of these characters who see them all t...
#11 of 56 The Greatest Non-White Actors in Hollywood 3.8k VOTES With audiences pushing Hollywood towards increased diversity both on- and off-screen, now is the perfect time to celebrate t...
Who Were Marvel Cinematic Universe Stars' Favorite Superheroes Growing Up? 4.1k VIEWS The countless talented actors in the Marvel Cinematic Universe have almost become the equivalent of Greek gods in our modern...
#5 of 56 The Most Handsome Black Actors Today 447 VOTES Before we can answer who the most handsome black man in the world is, let's first decide the hottest black male actors right...
How Much Is The Cast Of ‘The Avengers’ Worth? 11.4k VIEWS Since 2008's Iron Man, the MCU has gone on to become the most successful film franchise in history, having outsold...
17 Famous Couples Who Were High School Sweethearts 686.8k VIEWS   This list of famous people who married their high school sweethearts is loosely ranked by fame and popularity. Cele...
Marvel Film Stars React To Stan Lee's Death 12.9k VIEWS Marvel Comics legend, pop culture godfather, and king of the cameo Stan Lee passed away Monday, November 12, 2018, at the ag...
40 Celebrities Who Own Restaurants 73.9k VIEWS List of celebrities who own restaurants. Whether it's fast food or fine dining, Hollywood is adding star power to the restau...

Anthony Mackie is also found on...